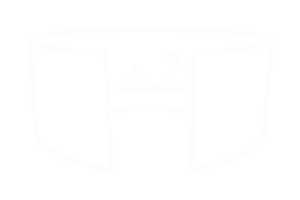 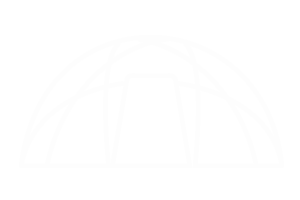 Igloo events help you get your message across – and make it stick. With wraparound sound and vision, you can engage, inspire and entertain.

And we can offer a complete, all-in-one solution – covering everything from design to delivery. Many of the world’s biggest brands have used Igloo – and we have delivered more than 400 unforgettable experiences around the globe.

Igloos have been used for...

Igloo 360° is all about experiences – which makes us the ideal experiential marketing solution.

Inside an Igloo, the senses are stimulated from every direction. Your audiences are immersed in the action and, if you add in our interactive capabilities, they can become part of the performance.

An Igloo makes for a truly spectacular exhibition space.

It’s a great environment to show off your goods and services. It can double-up as a conference space or hospitality venue and the branding possibilities are endless – with panoramic 360° media inside and a huge blank canvas outside.

To host a memorable event for customers, business partners, or employees, Igloo 360° is the readymade solution.

It’s the ultimate go-anywhere venue, we can accommodate anything up to 750 people and we can provide every element of the ultimate night out.

You’ll see us at music festivals and arts festivals – from Glastonbury to the Venice Biennale. You’ll also see our installations at visitor attractions and art galleries around the world.

The end-to-end solution – or any individual component

We can create every component of your event or we can fit right in with your existing teams and agencies.

Igloos can come fully-crewed. They’re also available on a dry hire basis. You can buy your very own. Or we can build a unique 360° projection space.

We’ve created unforgettable experiences for many of the world’s biggest brands as you can see below. 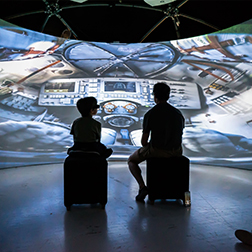 One of the challenges with conventional VR experiences is how to share them with younger children. This is something that the UK’s Science Museum Group had faced with the Space Descent VR experience featuring astronaut Tim Peake.

It’s been hugely popular. It’s attracted plenty of media attention. But it’s only been suitable for ages 13+, which precludes a large proportion of Science Museum visitors - and can make for some furiously unhappy would-be astronauts.

Igloo was asked if we could help to make the experience more inclusive, and suitable for the whole family. And, as a result, a 360° 3D version of the experience was created for a 6-metre Igloo dome, which was in-place for the entire summer season. 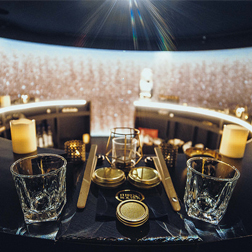 In London, Ferrero Rocher has a reputation for creating talked-about pre-Christmas pop-up experiences.

For the 2017 pre-Christmas period, creative agency Haygarth produced Behind the Layers, a multi-sensory tasting experience in a prime location at London's Westfield centre.

A key ingredient was Igloo Shared VR. Two of our 6-metre cylinders were used as the backdrop for the 45-minute experience, which took guests deep into the heart of Ferrero Rocher.

As suspected, the installation was a real talking point, picking up a tranche of media coverage including the Evening Standard and the Independent. 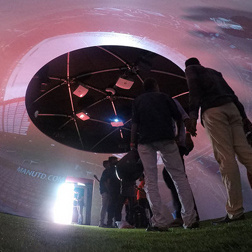 Taking fans to the Theatre of Dreams using Shared VR

As Manchester United’s Official Ride Partner, Uber was looking for a way to tap into the passion of the club’s global fanbase.

Supported by COPA90, Uber launched its Destination United programme, with the aim of collapsing the distance between the fans and the club by bringing them closer to the team they so passionately support.

Igloo was enlisted to become part of the Old Trafford Destination United experience, which debuted in Bengaluru, India in April 2018.  An incredible 360° film was created by Jaunt VR to recreate the atmosphere of Old Trafford.  The match between Arsenal and Manchester United was also live-streamed into the Igloo, and former Manchester United player Wes Brown was there in person to complete the experience. 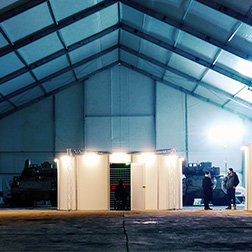 #OperationBetter – bringing families together with live streaming and Shared VR.

Commissioned by Hyundai Motor America, we worked alongside a multi-national team including Innocean Worldwide, Film 45, and Pony Show Entertainment. Together, we surprised three US soldiers by virtually transporting them to Houston to watch the Super Bowl with their families, who they hadn't seen for months. The Igloo shared VR cylinders, combined with a two-way communication feed, allowed the families to enjoy the game, as though they were together in the stands.

An advertisement was shot, edited and produced live during the first half of the game, a first for the advertising industry. Acclaimed director Peter Berg had less than an hour to produce the 90-second , which aired immediately after the game – and was seen by more than 100 million people.

Three separate 4K 360 video streams were captured in Houston using Nokia OZO cameras.  They were then transferred to Poland by satellite, unpacked and displayed in full 360° in three Igloo cylinders. 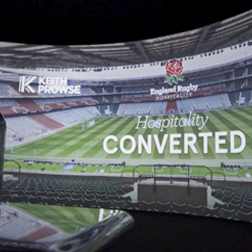 England Rugby Hospitality and Keith Prowse collaborated with Igloo to introduce clients and fans to the new hospitality packages available at Twickenham Stadium.

An Igloo 360° projection cylinder is used to showcase the hospitality experiences, offering an immersive Shared VR experience right next door to the stadium itself.

Enabling access to the new hospitality areas prior to their completion allows prospective clients to view the packages and interact with the facilities in real time. 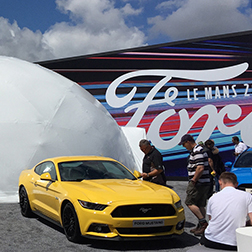 50 years after Ford's famous 1,2,3 motorsport win, motorsport fans at the 2016 Le Mans 24 hour race and the FIA Endurance race in Shanghai had the opportunity to enjoy an immersive 360° Ford Performance experience.

To get a feel for the experience, take a look at the 360º content on Youtube, which is best viewed on your smartphone and/or through Google Cardboard. 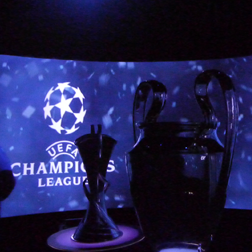 Immersing fans in the passion and excitement of the Champions League

Adidas and Savvy Sport took a 6-metre Igloo dome on the road to Wembley with the UEFA Champions League Cup.

The idea was to give sports fans a taste of how it would feel to hold aloft the Champions League Trophy in a packed football stadium. So, we worked with Savvy Sport to create a fully-branded Igloo. We then filled this with 360° crowd scenes, along with inspirational footage of past team wins from every angle. 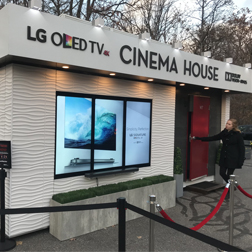 Electronics brand LG wanted to partner with Dolby to raise awareness and consideration, broaden reach and create some buzz for the new razor-thin range of LGW7 TVs.

They found their answer in Cinema House, a 20-foot by 20-foot structure constructed from two shipping containers that, as its name implies, blends the aura of the cinema with the aesthetics of a modern home.

Inside Cinema House, six people at a time sit on a large couch as the lights dim and the LGW7 illuminates before them. The TV broadcasts a sizzle-reel that demonstrates its capabilities. Then, using an Igloo shared VR, they are immersed in a full 360° experience that emanates from the screen onto the house’s walls with clips from the Netflix movie “Okja,” and the hit series, “The Defenders” and “Stranger Things 2”. Starting in New York, the experience went on tour to visit several US cities during 2017 and 2018, including LA, Chicago.

If there is one thing we’ve learnt about events in an Igloo, it's this – your event will only ever be as good as your content.

The great thing is that you’ve got so much scope to create something amazing. So, for example, you can:

See our content pages for more details, or call us for guidance.

Indoors or out, they look just stunning. They are inherently robust, quick to rig and de-rig, and come complete with all the health and safety paperwork. And, by customising the cover, you also have a huge blank canvas to work with.

But, if your space and time are more restricted, you can also use one of our projection cylinders, which are even quicker to rig and are specifically designed to fit under standard ceiling heights. They also come with an exhibition-grade finish, and can be easily branded.

Don't take our word for it

What do our clients think?

“The beautiful thing about the Igloo cylinder is that you can just step right inside the orchestra and sit in the heart of it. So, it’s a really emotional experience.”

“When you show your film in a headset it’s amazing, but it’s a lonely experience. With Igloo, you’ve all been there together, you’ve got the message together, and you can discuss it together.”

In our 10+ year track record, Igloos have been used by 100s of clients across many different sectors.
So, please, get in touch to tell us about your ideas and how Igloo can bring them to life.